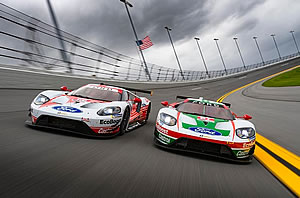 Both cars only turned a combined seven shakedown laps in opening practice, which featured steady rainfall that followed an early morning Daytona downpour. The second practice session saw a drastic improvement in weather conditions, with the Nos. 66 and 67 setting the third and fifth quickest times in GTLM, respectively.

Despite continued sunshine, track temperatures cooled slightly as qualifying began. Both Fords held on pit lane for a few minutes into the session, before setting out to turn in their laps. In the end, Ryan Briscoe set the top lap for Ford, placing the No. 67 in third position.

“It was a strong lap, the car felt good. It was a bit disappointing to not have enough for the pole, but I’m still happy with my performance,” said Briscoe. “We had a little lockup early that gave us a bit of a flat spot, but nothing too bad. It ended up being a great lap, and these Michelins are definitely quicker than ever. Times are fast across the class in general, so it’s going to be tight competition with the other manufacturers, but the team will give it everything as always.”

"There's no question we've been trying to catch up since the Roar test with the added weight and the less horsepower we have,” said Hand. “We spent the entire test there trying to decipher the car and we're still doing that. There's definitely a difference with the cars with that added weight, so we're still working through what the car wants. We've been here before. A couple years ago we struggled, but then figured it out right before the race and the race was great. We'll keeping tuning on it. This team has won a lot of races here at Daytona. That's not by accident."

Next up for both Ford GTs is night practice session under the lights and Friday’s fourth and final practice session before the team takes to the track to try for a third consecutive Rolex 24 title.

"It's been tremendous to have the Ford GT win here the last two years,” said Mark Rushbrook, global director, Ford Performance Motorsports. “It shows how strong the car, the team and the drivers are in this program. We've come back with a competitive package, and to be able to win a third time in such a historically significant race like this in our fourth year in the program would be beyond most expectations.”

About Chip Ganassi Racing
Chip Ganassi has been a fixture in the auto racing industry for over 30 years and is considered one of the most successful as well as innovative owners the sport has anywhere in the world. Today his teams include two cars in the IndyCar Series, two cars in the Monster Energy NASCAR Cup Series, two factory Ford GT’s in the IMSA WeatherTech SportsCar Championship and two factory Ford GT’s in the FIA World Endurance Championship. Overall his teams have 19 championships and more than 210 victories, including four Indianapolis 500s, a Daytona 500, a Brickyard 400, a Le Mans 24 Hours, eight Rolex 24 At Daytonas and the 12 Hours of Sebring. Ganassi boasts state-of-the-art race shop facilities in Indianapolis and Concord, N.C., with a corporate office in Pittsburgh. For more information log onto: www.chipganassiracing.com