DAYTONA BEACH, Fla. -- Ford Chip Ganassi Racing’s No. 67 Castrol Ford GT and drivers Ryan Briscoe, Richard Westbrook and Scott Dixon overcame early adversity and harsh weather conditions to nearly capture FCGR’s third consecutive Rolex 24 At Daytona victory. However, lady luck was not in their favor, and the trio missed out on victory by a single lap after the race ended early due to red flag conditions, pushing them back to fourth. Joey Hand, Dirk Mueller and Sebastien Bourdais finished seventh in the team No. 67 Motorcraft Ford GT.

"It's disappointing not to win here today, because we certainly had two cars capable of winning,” said Mark Rushbrook, global director, Ford Performance Motorsports. “The weather conditions were treacherous for everyone, and it certainly played into how the race turned out. But we had both Ford GTs get back to the front after issues on the track, and that's a tribute to the Ford and Ganassi crews and their never give up attitude, who worked so hard to make repairs under very tough conditions for them. We didn't win today, but these efforts go a long way to helping win championships."

Briscoe started the No. 67 Castrol Ford GT in second, holding position for most of the first hour of the race, but trouble befell the team 55 minutes in when Briscoe slid into the pit exit wall on cold tires after his first stop, sending the car to the garage for repairs. Further issues found their way to the No. 67 when Westbrook received a stop and hold penalty for three and a half minutes due to an improper wave around procedure under caution. The initial penalty dropped the team two laps down on the leaders, with the No. 67 falling to a low of five laps down after additional penalties in the first half of the race.

The No. 66 Motorcraft GT took the green in sixth place, with Hand at the wheel. The team fought their way up and down the rankings over the first 12 hours, culminating in an impressive taking of the second position by Bourdais in a tight multi-car battle in GTLM with just under 10 hours remaining. Then, with just over nine and a half hours remaining, light rain began and quickly became heavier, causing both cars to briefly slide off the track in the International Horseshoe.

After a pit cycle with nine hours to go that included brake changes for both cars, the No. 67 finally found itself back on the lead lap, ready to climb back up towards the front of the field. Weather conditions worsened and led to a lengthy caution for conditions followed by a red flag that lasted over an hour and a half. It was the first red flag at the Rolex 24 since 2004.

At 9 a.m. Sunday morning, cars began to roll again, but the race frequently cycled back and forth between cautions for the remainder of the race. On a restart just before 11:00 a.m., a competitor crashed into the back of the class-leading No. 66 Ford GT, sending the car to the garage with significant rear end damage. FCGR performed a blitz 19-minute repair to get the car back out on track, but it was multiple laps down. 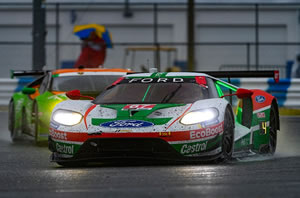 “We had a car that was quick enough to win this race, and we got ourselves in a position to win the race at the end, or at least have a good shot at it,” said Hand. “Out front, the rain was treacherous, and I was surprised we went green, but everybody’s in the same boat. I just drove it down into Turn 1 and got hit from behind by a Porsche just spinning out of control. That’s not the way you want to start the season.”

The No. 67 returned from five laps down to find itself in a position towards the end of the race to steal a win with Westbrook at the wheel. Between cautions and brief periods of green, Westbrook stretched out a fuel stint for nearly two full hours.

“I thought we played it beautifully,” said Westbrook. “We were five laps down, though it took us a lot longer to get those laps back than we ever anticipated. Patience was the key, though, and we got them back. We knew it was going to rain at the end, so they put me in the car, and I love the rain. I had to be really patient in the beginning, just getting used to the conditions. Finally got some confidence out there and we were able to pull out a sizeable gap in the lead. And at that point we were in control, but I just couldn’t understand why we were still running at that point.”

On the lap he was due to finally pit for fuel, a yellow flag was thrown for a crash, followed nearly immediately by a red flag for track conditions. Westbrook was caught when pitting for emergency fuel and fell to third, which ended in a fourth-place finish when a penalty for entering closed pits was factored in.

“It’s really, really tough to take it right now, when you consider the fight that we put on,” continued Westbrook. “To come away with nothing is a real kick in the teeth when we had gotten ourselves in the right spot.”

“We’ll battle back,” added Hand. “Overall, the whole team did a great job today. It’s why we always have a chance to win this race, this team knows how to adapt. That’s what it takes to win races, and that won’t be our last shot to win this year.”

Next up for Ford Chip Ganassi Racing’s IMSA program is the 12 Hours of Sebring March 13-16 as part of the “Super Sebring” weekend.